Home
>
News
>
OUR PAST IS OUR FUTURE 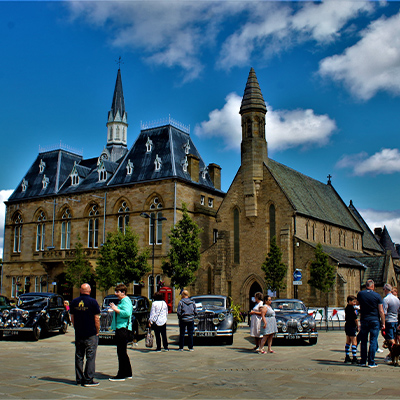 In December 2010, a City of London Investor – Jonathan Ruffer – bid £15 million for the life sized paintings of Jacob and his Twelve Sons, hanging in Auckland Castle, Bishop Auckland. They had been painted by the Spanish artist Francisco de Zurbarán and came to Bishop Auckland in the 18th Century.

The paintings have been hanging in Auckland Castle since 1756, when Bishop Trevor bought them at an auction. They didn’t come cheap! However, in their day, the Bishops of Durham were fabulously wealthy and powerful individuals. Some fought beside the King in major battles – they were known as the Prince Bishops.

Once Mr Ruffer had acquired the paintings, the story goes that he didn’t have anywhere big enough to hang them. So, he bought Auckland Castle as well!! At this point, the direction of the historic town of Bishop Auckland significantly changed.

Fated to continue on the downward economic slope, like hundreds of other towns in the UK, a change of destiny started to unfold for the Town.

Mr Ruffer set up two charitable trusts to develop the assets he bought to carve out a different future for Bishop Auckland. The aim was to support the Town into becoming a vibrant place that people would want to visit and experience. It would need investment and it would need many years to transform.

The first trust developed into The Auckland Project. The second formed the Eleven Arches charity, which produces the award winning Kynren show. The historical outdoor extravaganza that is Kynren, had its first season in 2016 and was a spectacular success. History was in the making for Bishop Auckland. And history was making a future for our Town!

Digging Up the Past and Showcasing It

In October 2017, the Mining Art Gallery opened up and has proved very popular. As Bishop Auckland is located in the extensive Durham County coalfield, it is fitting that the gallery showcases the art created by miners.

In November 2017, Bishop Auckland became the only town in the North East to achieve WoldHost Destination status.

The developments at Auckland Project and Kynren have helped unlock Government funding to improve the infrastructure of the town.

The Market Place was renovated in 2018 to accommodate the building of Auckland Tower. The Town Hall underwent a £1.5 million refurbishment and reopened in 2020. This was in anticipation of 1 million visitors per year, by the time the new infrastructure investment is completed.

In 2018 Durham County Council published a Masterplan for Bishop Auckland, after two consultation exercises with local residents. The following year, Bishop Auckland was awarded Heritage Action Zone status to use its social, cultural and historical features to help regenerate the town. Initially around 50 projects were identified to implement over a 5-year period.

Then last month, it was announced that Bishop Auckland had been awarded £19.9 million to develop a new bus station; build a 1,200 vehicle car park; improve the look of Newgate Street; bring disused and empty buildings back into use; and support the development of hotels. These were some of the features identified in the Masterplan. The successful bid was done through the Government’s Future High Street Fund.

At the end of January a bid of around £50 million was again submitted by Durham County Council to the Government for more infrastructure projects. This included developing a 5G technology network; an enterprise park for small start-up businesses; improving the look for Newgate Street and the Market Place; developing a centre at the local college to train people for the future jobs in Bishop Auckland; providing a link road to the new car park to be serviced with shuttle buses; build access bridges from the car park to the 11 Arches site; improve platform and station facilities for Weardale Railway; develop a new Heritage Transport Museum with the North East Bus Preservation Trust; develop heritage walking and cycling routes; and improve the roadways around Tindle Crescent.

All of this development – that in place already and the projects to be developed – started with Mr Ruffer buying the Zurbaran paintings and liking Bishop Auckland.

The Town Ambassadors are looking forward to the completion of the plans for Bishop Auckland over the next 10 years. We hope more people will join us in welcoming visitors to our great Town!

Our Past really is Our Future!!

No products in the cart.